Rachel McAdams as Allie and Ryan Gosling (left) as Noah in "The Notebook." An epic story of love lost and found from New Line Productions.

would hardly have objected to blurring the lines between real life and film since he often did so himself, telling supposedly true stories that turned out to be dialogue from his movie roles. So there's my license to point out similarities between Ronald and

Nancy Reagan's lifelong love affair and the one sweetly captured in "The Notebook," an old-fashioned and occasionally schmaltzy movie that delivers an emotional wallop sure to elicit tears from all but those with truly intractable hearts.

Both blissful marriages -- the real and the fictional -- endure the test of Alzheimer's, and both prove their resilience. There's a poetic irony in the release of this touching picture so soon after death finally parted the inseparable first couple.

"The Notebook" focuses on the roots of a marriage for life, not on the nightmarish effects of an insidious disease. Unlike

Judi Dench's disheveled appearance in "Iris," Gena Rowlands, as an Alzheimer's sufferer, is perfectly coifed and made up and, except for a blankness around her eyes, could be headed for a tea party. James Garner, even more adorable with age, plays her devoted husband, who moves into a plush nursing facility rather than be apart from his beloved. The scenes at the home strive to get details about Alzheimer's right, such as a nurse's use of the word "sundowning" to describe Rowland's agitation as night begins to fall.

In her few lucid moments, she recognizes elements of the story her husband reads her every day from a well-thumbed notebook. In it, a spirited Southern debutante named Allie (not unlike the Zelda immortalized by F. Scott Fitzgerald , minus the craziness) becomes enraptured with a mill worker over the objections of her snobbish parents. Her blazing romance with Noah takes over "The Notebook," transporting it to the lush expanse of the deep South in the 1940s. 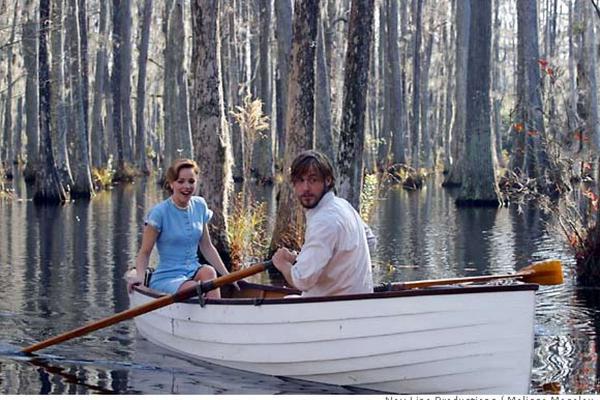 Preferred shopping Shopping I made my own travel safety kit with a Stasher bag Shopping I drank this CBD-infused coffee for a week. Here's what I...

Shopping The CDC gives exercise guidelines – here's how to follow...

Shopping How to set up your own stock tank pool The movie is largely faithful to Nicholas Sparks' best-selling novel, except that screenwriter Jeremy Leven has tinkered with the chronology and added some spicy sex scenes between the young couple, appealingly played by Rachel McAdams and Ryan Gosling. McAdams (last seen in "Mean Girls") is a star in the making, and Gosling emerges from his dark, depressing roles in "The Believer" and "Murder by Numbers" to be a romantic figure.

The actors set off sparks from their first scene together at a carnival, when Noah becomes convinced he's met the girl of his dreams. But forces conspire against them, including an underhanded attempt by her mother (a subdued Joan Allen) to end the relationship and, of course, a rival suitor (James Marsden, proving his appeal as something other than a mutant), who's better-looking than Noah. The connection between the youngsters we watch fall in love and the old couple at the home becomes rather obvious, but I'll leave it to audiences to connect the dots.

Nick Cassavetes directs in a straightforward manner, and there are moments when the movie sags under the weight of its sentimentality. His real talent comes in casting. The principals are uniformly pitch perfect, including Rowlands, who happens to be Cassavetes' mother, though few would call this nepotism.

In its traditional approach, "The Notebook" is a sharp contrast with the experimental films of the director's father, John Cassavetes. But in a summer filled with loud action movies, there's something to be said for a quiet story of enduring love.

Next: I will see you (song)