We’ve become used to thinking of Chromebooks as simple productivity machines: a web interface for classwork, online productivity apps, and not much else. But there are many ways to game on a Chromebook, too.

You have three options to play games on most modern Chromebooks: as a web app, an Android app, or remotely via one of the prior two ways. Gaming on a Chromebook can mean playing the same games you’d play on a PC, but given all the options you could argue that the diversity of games on a Chromebook is richer than that of a PC.

As we’ll explain, though, many of the gaming opportunities a Chromebook offers depends on accessing a game on a remote server. The quality of such gaming experiences will depend on the quality of your Internet connection and, to some extent, on what processor the Chromebook contains. Only Android apps, many of which assume the presence of a slower Arm chip, will run natively (and probably very smoothly) on the Chromebook itself.

Which Chromebook to buy for gaming

Below, we’ve included a guide to get you up and running. Feel free to refer to

our guide and recommendations for picking a Chromebook

differences between a Chromebook and a traditional Windows laptop

. For gaming, you’ll probably prefer a Chromebook with a touchscreen. A 360-degree convertible that folds into a “tablet” mode is quite handy for Android games. We’ve recommended a few good models for gaming above.

may be a conversational browser-based game, but it’s still a place to start when considering Chromebook games. It just gets better from here.

How to play web games on a Chromebook

As you might expect, playing a game inside of a web browser on a Chromebook is a lot like playing it on a PC’s web browser—load up the site and you’re ready to go. In 2021 there’s one key difference from years past:

, the foundation for an entire generation’s worth of web games.

However, the well-publicized demise of Flash allowed popular Flash entertainment repositories like

time to convert their games to HTML5 or provide transitional plug-ins. If you visit a site like Newgrounds, you’ll be able to play the site’s simple Flash games and movies with no trouble at all. A competing site, Kongregate.com, asks you to install

Flash gaming may be a carryover from a bygone era, but it still houses a few interesting, unique titles.

Just be warned: Flash games on sites like Newgrounds can be notoriously weird. Creative coders used to put their own spins on Nintendo games and other licensed IP, which lawyers have now quashed, leaving games like

Browser-based gaming starts to open up a bit more when you visit the Chrome Web Store, which allows you to download Chrome game extensions. Click with caution here, as Google seems to have ditched its dedicated gaming section for some reason. Chances are that you’ll have to search out older games like

A smaller number of “native” browser-based games will take advantage of your Chromebook’s CPU and graphics capabilities. A good example of this is

, essentially the demo of the old iD game

or an open-source version of the PC classic

FreeCiv Web isn’t the prettiest of games, but it runs in the Chromebook’s Chrome browser and entirely for free.

The “traditional” browser-based games are certainly not exclusive to Chromebooks. Games like

for additional options. They should all be playable on a Chromebook.

How to play Android games on a Chromebook

the version of the Chromebook operating system that allowed ChromeOS-powered Chromebooks to run Android apps. Virtually every Chromebook shipping since 2019 includes this capability.

series still provides one of the more graphically intensive experiences of any Android app running locally on a phone or Chromebook. It also runs in landscape mode.

For the purposes of gaming, your Chromebook is simply a larger Android phone. In fact, your Chromebook will include the Google Play Store app down in the Chrome OS shelf, otherwise known as the taskbar. Select the app you want to install, and Google will download it and install it on your Chromebook. 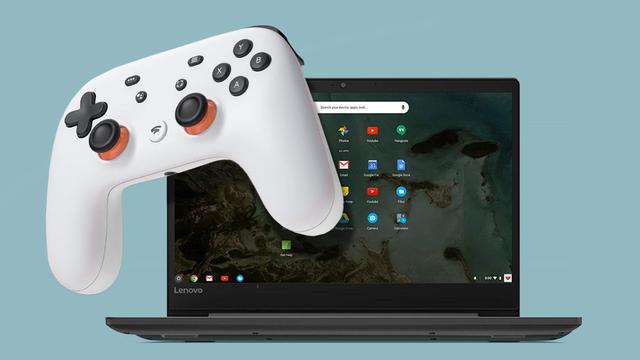 Because many Android apps depend upon touch, you’ll want to own a Chromebook equipped with a touchscreen. You’ll also quickly realize that you usually hold your phone vertically, while a Chromebook’s screen is oriented horizontally in landscape mode. Many Android games will carve out a narrow vertical strip on a horizontal screen. A Chromebook that you can fold back into a tablet configuration and then reorient into a vertical portrait mode will allow you to take full advantage of your “tablet’s” screen.

Many Android games formatted for traditional smartphones will align themselves vertically on a Chromebook.

A Chromebook also allows you to mix and match input methods. In some games a touchscreen is best, though a touchpad or a mouse may serve just as well. Games like

smartly support both keyboard input as well as Chromebooks that include gyroscopes, for tilt steering.

As far as gaming recommendations go, the sky’s the limit. We selected the

a few years ago, and followed that up with the

best Android games of the year

, period. Many PC games, such as

, have made the transition from the PC and console onto native Android apps. Statista

there are over 480,000 Android games available as of the first quarter of 2021, so you’ll have plenty to choose from.

We can’t say for sure how well each game will run on your Chromebook, but the affordable price usually justifies trying them out. Google’s refund policy also usually allows you up to 48 hours to decide whether you want to keep the game or get your money back.

How to play PC games remotely on a Chromebook

Once you start combining the power of a web or Android app with a Chromebook, your gaming horizons can expand further. It’s at this point, however, that gaming moves off of the Chromebook and into the cloud.

Remote or cloud gaming uses a PC or a console situated remotely, and streams the resulting content down to your Chromebook. You sign up for a service like Google Stadia, and typically download a small web app or Android utility. You can typically connect an Xbox or other third-party controller to the Chromebook, or simply use a keyboard and mouse.

During gameplay, the Chromebook and app will take your button or key inputs, send them up via the Internet to the cloud PC, and then show you the results of your actions. It happens so quickly that you’re more or less “playing” the game right on your Chromebook.

There will always be a bit of input lag, which will make fast, twitchy games less responsive. You’ll see better results with metropolitan broadband connections, for example, than rural DSL. That matters less in slower-paced adventure and exploration games, however, which is why a game like

was a launch title for the Google Stadia service.

It’s a faster-paced game, but it’s still part of the Google Stadia series.

in February, 2021, allowing you to try out cloud gaming on Google’s own service. But—and this is a big but—our original

review of the Stadia service

, and there are a

) to play Xbox cloud games on a Chromebook—that story has a detailed evaluation of how to set it up, plus what works and what didn’t. Unfortunately,

demands a Windows 10 PC, not a Chromebook. Google’s rival in the cloud, Amazon, also

that will eventually run on Android devices—it’s stuck in early access for now, however.

This is Microsoft’s own

running on a Chromebook. In this still image, you can see how Microsoft paints some of the periphery of the game in lower resolution. At full speed, though, it’s not really noticeable.

We haven't even reviewed all the cloud gaming services available. One intriguing option is

, which can stream to a PC or a Chromebook’s Android app. You can

for $12 per month. Pony up $25, and Shadow promises that your game can run on the equivalent of a Nvidia GeForce RTX 2080 in the cloud. Yes—ray-traced graphics on a Chromebook!

If you own a PC, there’s another option: Use your PC as the local “cloud” and stream games from it. It’s a viable option if the “gaming” PC is in another room in the house, and a child wants to spend some after-hours time in the privacy of their room. That used to be the domain of Nvidia’s GeForce-powered

, but an open-source project called

t takes the GameStream protocol and can route it to Android-powered devices like Chromebooks, too. (Valve, unfortunately,

All of those available, competing options provide two great benefits for users. Competition should keep prices in check, and you’ll have a wealth of services

games from which to choose. Part of the hurdle is simply accepting that inexpensive, portable little Chromebooks

be used as gaming machines—you’ll just need to discover what works for you.

Note: When you purchase something after clicking links in our articles, we may earn a small commission. Read our

Next: The best low-spec computer games