The importance of laboratory notebooks

Years after obtaining a patent on the telephone, AlexanderGraham Bell was challenged by another inventor who claimed he had first devisedthe telephone. Bell fought a contentious lawsuit and proved, with the aid ofhis lab documents and his wife’s testimony, that his invention had priority.Patent protection is often dependent on proving who and how an invention wascreated. Documentation of inventions, an essential element in the patentprocess because it authenticates the invention process.

The most reliable and useful way to document an invention isto use a permanently bound notebook with the pages consecutively numbered,usually known as a lab notebook. Engineering and laboratory supply stores sellthese notebooks with lines at the bottom of each page for signatures andsignature dates of the inventor and the witnesses. A standard crackle-finishschool notebook is also suitable, provided that the inventor numbers all of thepages consecutively, and has each page or each invention description dated, signed,and witnessed.

Description and novel features of the present invention

proceduresused in the building and testing of the invention

drawings,photos, or sketches of the invention

discussionsof any known prior-art references, and

additionaldocumentation, such as correspondence and purchase receipts. 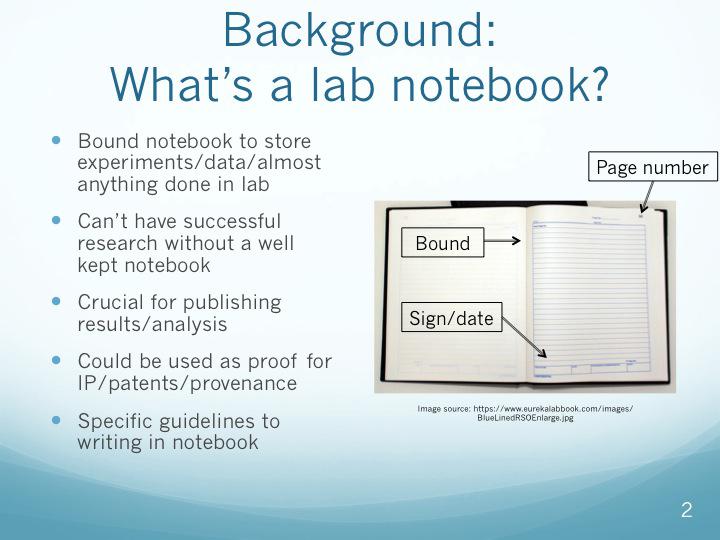 , by Fred Grissom and David Pressman(Nolo), provides organized guidance for properly documenting the inventor’sinvention. More information about The Inventor’s Notebook and how to order itcan be found at the end of this book. Lab notebooks can be purchased throughEureka Lab Book, Inc. or Scientific Notebook Company.

How Information Is Entered in the Notebook

Entries must be handwritten and must accurately describe howevents occurred.

All entries must be dated as of the date the entry is madeor must include an explanation for any delays in making an entry. The inventormust sign every entry. Computer printouts or other items that can’t be entereddirectly in the notebook can be signed, dated, and witnessed, and then pastedor affixed in the notebook in chronological order. Photos or other entries thatcan’t be signed are pasted in the notebook with a permanent adhesive andreferenced by legends using descriptive words, such as “photo taken of machinein operation,” made directly in the notebook. Draw in lead lines that extendfrom the notebook page over onto the photo to prevent a charge of substitutingsubsequently made photos. These pages are signed, dated, and witnessed in theusual manner. An item covering an entire page should be referred to on anadjacent page. A sketch drawn in pencil should be photocopied and affixed inthe inventor’s notebook in order to preserve a permanent copy.

Notebook entries should be witnessed because an inventor’sown testimony, even if supported by a properly completed notebook, will oftenbe inadequate for proving an entry date.

The witnesses do more than verify the inventor’s signature;they actually read or view and understand the technical subject material in thenotebook, including the actual tests if they are witnessing the building andtesting. For this reason, the chosen witnesses should have the ability orbackground to understand the invention. If the invention is a very simplemechanical device, practically anyone will have the technical qualifications tobe a witness. But if it involves advanced chemical or electronic concepts, awitness must possess adequate background in the field. If called upon later,the witnesses must be able to testify to their own knowledge that the facts ofthe entry are correct. While one witness may be sufficient, two are preferredbecause this enhances the likelihood of at least one of them being available totestify at a later date. If both are available, the inventor’s case will bevery strong.

To preserve the trade secret status of the inventor’sinvention, the inventor should add the words “The above confidentialinformation is” just before the words “Witnessed and Understood.”

Part of the content of this article comes from

Latest: How to save the lab notebook

Next: What is a copy lab notebook?