Last time we saw the 14-inch Razer Blade, it was equipped with a 7th generation Intel CPU and NVIDIA GTX 1650 graphics. Now it's back, it is powered by AMD's Ryzen 5900HX and up to RTX 3080 GPU. What a difference three years can make!

Recently, Razer has focused on cramming more specs into its Blade 15 and 17 notebooks, while pushing for portability with its 13-inch Blade Stealth. That didn't leave much room for a 14-inch model. But now that AMD's laptop CPUs are offering some serious benefits over Intel, it makes sense for Razer to experiment with different models again. (And personally, I've been waiting for something between the cramped Blade Stealth's screen and the Blade 15.)

Razer isn't changing much with the Blade 14's design: It has the same unibody aluminum case that the company has been relying on for years. But it's what's under the hood that's important. This Blade 14 marks the first time Razer has used an AMD CPU. And the eight-core, 16-three 5900HX should be compelling to creatives and gamers alike. While it would have been nice to see Razer go all-in with AMD like ASUS's ROG Strix G15 Advantage, I suppose the company wanted to take its AMD partnership a bit slowly. Still, NVIDIA's hardware is nothing to complain about, especially if you want superior ray tracing performance.

Razer claims the Blade 14 is the world's smallest 14-inch laptop (watch out, Zephyrus G14!). It measures up to 16.8mm thick, compared to 19.9mm on the Blade 15 and 15.mm on the Blade Stealth 13. At 3.92 pounds, it should also feel significantly lighter than the 4.6-pound Blade 15. Naturally, Razer is relying on the same vapor chamber cooling hardware it's using across the rest of its laptop line. But with a smaller case, it'll be interesting to see how heat compare to the Blade 15. (The Blade Stealth 13 only has NVIDIA's slower GTX 1650 Ti graphics, so it can get away with having a much thinner case.)

The Blade 14 comes with either a 144Hz 1080p screen covering up to 100 percent of the sRGB gamut, or a 165Hz 1440p screen with 100 percent DCI-P3 coverage. The big takeaway is that the higher-res monitor will show off a lot more colors. Both screens will also support AMD FreeSync Premium to keep gameplay smooth. 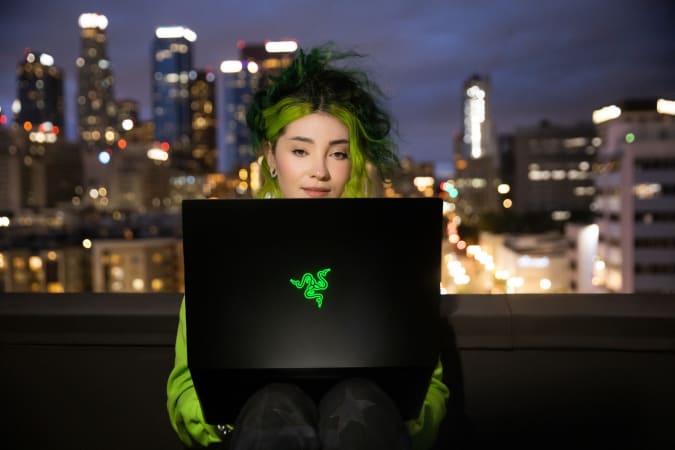 Accessory-wise, the Blade 14 will feature a 720p webcam with a Windows Hello IR sensor, allowing for fast and secure logins. Razer's RGB keyboard makes a return as well, and I'm hoping it's the same size as on the Blade 15. Even though it's a smaller computer, the Blade 14 will still offer a decent amount of ports: two USB 3.2 Type A ports, two USB 3.2 Type C connections, HDMI 2.1 and a headphone jack. Unfortunately, there's no built-in Ethernet, which alone could be a dealbreaker for some folks.

Blade 14 starts at $1,800 and will be available today. You can also pair it with Razer’s USB-C GaN charger, which also arrives today.

Next: Acer Chromebook Spin 713 Review: Everything has to do with the display